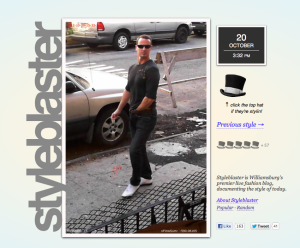 It was made by Jules Laplace, the technology director for OkFocus. What it is…is a site that takes real-time pictures of people (hipsters) walking the streets of Brooklyn, New York. The camera is set-up in his apartment and takes a photo whenever someone passes by his window and instantly posts it to the site. Viewers of the site can click on a top-hat icon to vote whether the person is ‘styleblasting’ or not. His goal with the website is…“It’s an egalitarian take on streetstyle,” he said. “There’s more to Williamsburg than hipsters and rich ex-Manhattanites. Everybody has their own style, and our site celebrates that.”

The camera is located a block from the Bedford Ave. L train. It seems some people are already aware of the camera because they are hiding their faces or ‘flipping the bird’.